Report: EU-US PRIORITIES IN NANOSAFETY identified during the BILA US 4.0 event 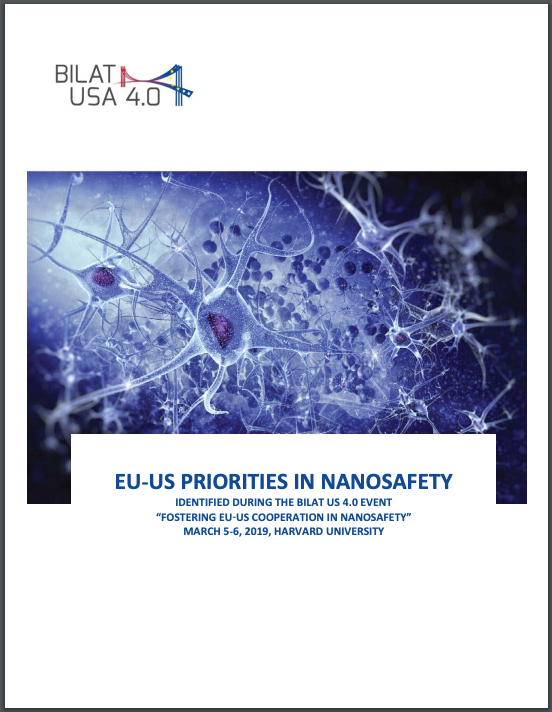 After an initial introduction with an overview on 15 years of cooperation in nanosafety between the EU and the USA, the first day started with an overview of the European and US perspective on Governance of technologies and current programs in Nanosafety from the European Commission and US National Nanotechnology Coordination Office.

The second session in day 1, titled Current US and EU running projects and next actions in Nanosafety, introduced relevant projects and initiatives and state‐of‐the‐art in nanotechnology research and policies.

In the third session in day 1, focusing on Reporting from current research projects and consortia, defining scope of cooperation, the participants had the chance to share knowledge between EU and US projects in Nanosafety, focusing on Nanosafety cooperation to next generations of nanomaterials.

The second day was designed with the intention to help the group converge on concrete ideas and craft priority areas together for future research cooperation between EU and US. An initial session set the scene with a panel discussion on implementation, research priorities, and future orientations.

The introduction session set the scene for a structured discussion by highlighting existing priorities identified on both the EU and US roadmaps on nanotechnologies. It was followed by a roundtable discussion where panelists and the audience were asked to reflect on what has been implemented and what needs to still be a priority?

Using Nominal Group Technique through a facilitated and structured dialogue, then lead to the identification of common EU‐US research priorities and ways to convey them to the relevant policy‐makers and funders.